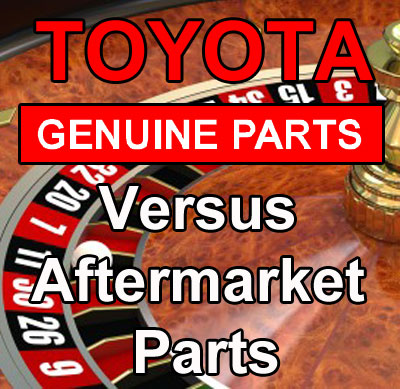 Toyota makes good parts, and that's what we want to use. Our biggest supplier of parts is a Toyota dealership. Our next biggest supplier is a company that sells us the same parts that were made by the original Toyota parts suppliers. The result is that the vast majority of the parts we use either come from Toyota direct (through a dealership) or from the original suppliers of the Toyota parts.

To give you an example, Nippon makes Toyota's fuel filters. The Nippon fuel filters look identical to the Toyota filters, and in fact, if we care to peel off the strip of black tape that Nippon has applied to the filters they sell us, underneath the tape is the original Toyota parts sticker with it's Toyota part number. It's the exact same part whether we buy it from Toyota or from Nippon. Same way with clutches.

A company with the name Aisin/Asco makes clutches and water pumps for Toyota. They used to sell those same parts to us new, in a Toyota box, at a price competitive with the same thing remanufactured from Toyota. There wasn't any question in my mind-I preferred the new to the remanufactured. Since then, Toyota has prevented them from selling those parts in Toyota packaging, but the parts still have all of the same casting marks and look identical, except the water pumps have had the word "Toyota" ground off and replaced with other company markings.

Again, I have a strong preference for Toyota parts. I've just seen too many poor quality alternatives. As a side note, it's not an uncommon strategy for some aftermarket suppliers to offer a lifetime warranty on their products. This is strictly a marketing tool and usually seems to have no relationship to the quality of their product.

Over and over I've met people who have gotten stuck with poor quality parts that repeatedly fail prematurely, and eventually they would get worn out with doing repeat repairs and decide that the better quality Toyota part was the better deal after all. Other times the life-time warranty was handled in such a slippery fashion and it was so difficult to manage their way through the hurdles set before them that the life-time warranty was effectively a lie.