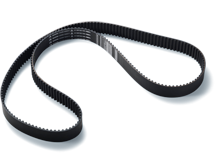 Exposure to heat or temperature variation, vibration and contamination makes belts and hoses wear out faster than any other components in your car. That's why regular inspections are so important. Here are the belt and hose types in your car, along with their applications.

Your timing belt is a critical belt, ensuring the proper timing between your engines pistons ; and valves. Sometimes if the timing belt breaks during normal engine use, this can damage your vehicle. Timing belt jobs are not easy, and require a skilled Toyota technician to perform the job, which sometimes includes replacement of the belt tensioner assembly which can also wear out. We strongly suggest routine timing belt inspections and service about every 40-60k miles to avoid damage to your engine.

The hoses that convey your car's fluids are made of two rubber layers with a layer of fabric in between. Typical hoses include:

An easy way to check fluid hoses (to the radiator) is to squeeze them in your hand (with engine cool) to feel if they are squishy, or "soft" feeling. If so, you may need your fluid hoses inspected and replaced. Don't get stranded somewhere out there without the right part -- auto parts retailers often do not have OEM parts in stock, which are the best parts for your Toyota.